Help Figuring Out a Stone 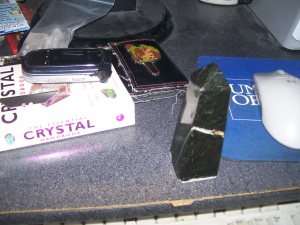 I usually don’t post about my ongoing personal work on this blog (actually I have a series of posts of questions I want to see if anyone can help me answer I plan to post soon in addition to my normal posts, but more on that later). But I have a project I’ve been working on for years now and every time I manage to figure something out about it, it just leads me to even more questions. And for a while now I’ve been stumped and haven’t gotten anywhere with it. So if anyone has information, if anyone has ideas, if anyone has experiments, or if anyone thinks they’ve figured this out, please post what you’ve got. This is my appeal to the Internet, and if nothing else maybe I can get some ideas on some new stuff to try.

There once was a powerful magician. He was a local public figure where he lived, and he is a minor US historical figure too, but he was not known for his spirituality and didn’t author any books. Out of respect for his surviving family, I’m not going to mention him by name.

He was a skilled craftsman and gem cutter, and made a lot of his own tools. And he was known to have some very strange stones, some that couldn’t be identified. He was also very rich and generous. I’ve been told that whenever he needed money he would go down to his basement, where his magical work area was, and sometime later he would come out with something valuable to sell, usually gold coins, of which he seemed to have an infinite supply. The local belief was that he had buried treasure in his basement (this treasure has been sought, but never found). There is however a belief within his family that he was able to leave this world entirely, and that he would sometimes return from his journeys with treasure. Several of his family members claim to have this ability, although none have ever proven it, nor do any have an infinite supply of gold coins.

Sometime after his death one of his grandchildren saved a pretty stone from a box of things that were going to be thrown out. Over the years he figured out some of its secrets, but he was never able to use it all that well and didn’t like it, ultimately keeping it locked in a glass case. I was eventually shown the stone and instantly got it to work, after which the magician’s grandchild gave it to me. When I got the stone it had a couple of small chips and I had to wash off soda pop sticky (apparently from an experiment where the stone was submerged in coke to make it work).

The stone is some kind of black marble. I don’t know enough about marble to properly ID it, but if anyone can tell me exactly what it is that would be a great help. The stone has a rectangular shape which is largest at the base and gets smaller at the top, until finally all four sides come in and meet at a point on the top. length-wise it’s roughly the size of an average palm. The stone is usually cold to touch, although it does become warm when charged.

What I’ve Been Able To Get It Do

When I was first given the stone I was told that it was a summoning stone. It’s power was that it could bring any person to you within about three days. Initially I inquired about using it to summon famous people, to which I was told that it had done that in the past, but it only brought people within close proximity to the stone, it didn’t make it so you’d necessarily meet them.

The very first thing I tried to do with the stone was summon a spirit. The stone is really good at this, and can actually do it in a matter of minutes. I’ve also found that the stone is very good at finding objects. More than once I’ve used it to find my car keys :)

I did discover a big limitation though. The stone is only able to find specific unique things. It can find my car keys because there is only one set of those in the entire world, it’s a specific thing. But it can’t just find me a key. Nor can it find me something specific that is not unique, like have a book I’ve been looking for appear in the store (it could however find the specific copy of a book I owned and lost). This goes for people too. If for instance I know a girl I have a crush on, I can draw her to me with the stone. But I can’t tell it the kind of person I’m looking for and then have it bring someone like that to me.

To operate the stone needs power from the practitioner. It actually needs a lot of power to do what it does. When I first got it years ago summoning anything with the stone almost completely drained me. I’ve gotten a lot stronger since then and I can do a lot more with it. I’ve never had a need to try using it more than three or four times in a row, but I don’t think I’d want to exhaust myself to the point that it would take to do six or seven, although I can probably do a bit more if I absolutely had to.

Early on my main focus was figuring out how the stone worked, exactly, so that I could figure out how to recreate it. Unfortunately I was never able to fully figure it out. It’s very odd and complicated and it doesn’t do things in the way you’d expect. I’m starting to suspect that its summoning ability is only a side effect and not its main purpose (especially once I saw how it was going about it). I more or less gave up on recreating the stone once I started to focus on unlocking its full potential.

What the Stone May Be Able To Do

After I had the stone for a few weeks, while I was summoning people and things and spirits like crazy with it, I was told that it should also be able to summon events. In the same way it was able to bring people and spirits and things to me, it should be able to bring specific events to me, in other words make them occur, or at least make them occur to me. This would encompass everything from getting a dream job to making someone realize they’re in love with me to winning the lottery. The full possibilities here are endless. Unfortunately I’ve never been able to get the stone to do this (actually I may have gotten it to work one time, but it was something I did to a friend who pissed me off so I don’t want to mention it).

The most interesting use though was something that was told to me recently by one of the magician’s family members. That they remembered seeing a stone that looked like this one, and which may even have been this one, within a group of stones that were set out in a circle. The theory was that the circle was a gateway out of this world, and that the key was the complete set of stones. Therefor if I could somehow recreate the circle either with the original stones or with new ones I could manage to walk out of this world in the same way this magician did.

I’ve gone into trance while using the stone and I’ve seen how it works. Imagine a line of white being very quickly drawn across a dark background, constantly creating new branches that take off into new directions and sometimes end. That’s sort of what it looks like. What I noticed is that it finds every portal in the room and then opens it up. Whatever portals are on the other side it’ll also open up, so on and so forth. It doesn’t really go towards what it’s looking for. It seems to just go everywhere. I think it also find events and circumstances and just starts pulling all of them in, and then it eliminates the ones that won’t bring forward what it needs.

It’s sort of like if I asked you to find someone for me, and the way you did it was you went and got every living person in the world and put them in a room, and then you went through each one and if they weren’t the person I was looking for you asked them to leave until one person was left.

It’s an effective method, and the stone can do it pretty fast considering everything it has to go through. But it still seems like a very inefficient method to me (which is probably why the stone needs so much energy to work). Still the fact that it can get good results in such a short time frame with this method shows just how powerful the stone is. But the fact that the method seems so inefficient makes me think that it has some other primary purpose, and its ability to summon things is just a byproduct of what it was made to do.

What The Spirits Have Said

Several times I’ve shown the stone to different spirits, often times seeing if I could get a method to recreate it, and I’ve gotten some information on the item. Several have been impressed by the stone and the method through which it works. The spirits who seem to understand it have also always referred to it as a key.

So this is everything I’ve been able to figure out about the stone over the last few years. If anyone has any information, ideas, theories, whatever feel free to post them. I’d be interested in getting some fresh ideas. 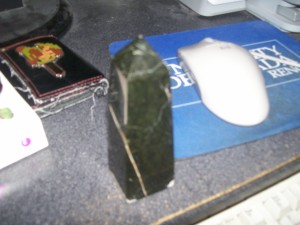 This entry was posted on Sunday, December 5th, 2010 at 4:35 am and is filed under Magick. You can follow any responses to this entry through the RSS 2.0 feed. You can leave a response, or trackback from your own site.

20 Responses to Help Figuring Out a Stone