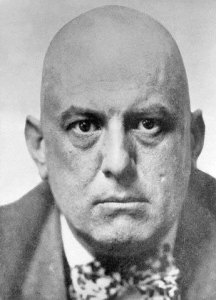 Waite Vs Crowley is the Nintendo Vs Sega rivalry of the magickal world. It’s the most well-known, most participated in debate, and a classic that will never die. Even today, these two men both being dead for over a half-century, one only has to spend a bit of time on the Internet to see Waite fans talking smack about Crowley, and Crowley fans talking smack about Waite. These men have become opposing icons of the magickal world, the wise old school occultist vs the sexy bad boy of magick. Unfortunately its all a lie.

Let’s begin by deconstructing the two reasons why these men would have a rivalry to begin with (and we’ll get to the rest later on). The first reason being, and the least complicated of the two, that they were possessed of two very different views on spirituality and magick. These two western ceremonial magicians who were both greatly influenced by the Golden Dawn and the works of Eliphas Levi, who were both well read literary men, and who both valued tarot enough to create their own decks (with some surprising similarities). I could go on, but all I get are similarities. One of the major differences listed is the fact that Crowley published secret information where as Waite believed in keeping it secret. But Waite published secret information when it pleased him to do so (the strength-justice switch of the Golden Dawn for example), where as Crowley created secret information for the eyes of the highest levels of the OTO only (and the OTO still practices this secrecy today). Furthermore the written works of both men are definitely valuable works created by adepts, and neither one, being at the level they were, could truthfully deny the value of the other’s work. Ultimately one can only surmise that these two men were not possessed of very different views on spirituality and magick, in fact they had strikingly similar views on spirituality and magick.

Secondly there’s the belief that this mutual hatred stems from the fact that Waite was part of one of several factions within the Golden Dawn that wished to change its direction, where as Crowley was a loyalist to Mathers, and that Crowley had played a central role in the ultimate demise of the Golden Dawn, something Waite wouldn’t forgive him for.

Let’s start with the idea that Crowley was a loyalist to Mathers. This is generally gathered from Crowley’s own statements about his history with the Golden Dawn, however this history has been disputed by some, particularly that Crowley achieved the 5=6 adept grade, which Crowley claimed was bestowed upon him personally by Mathers in a secret ceremony. There is evidence that Crowley received the 5=6 material from a friend, and that he never surpassed 4=7. Crowley’s own accounts also show that he felt that Mathers and the Golden Dawn had cheated him out of his money, that the secret information was not what was neither secret nor what he was initially promised, and he had a very bitter and public rivalry with Mathers until the later’s death, both publishing the secret Golden Dawn material developed by Mathers and publicly claiming Mathers had engaged in psionic vampirism against him. Although Waite was definitely opposed to Mathers in the end, Crowley seems to be in the same boat with him. Shortly after the original Golden Dawn resolved both men went on to form their own splinter groups, Crowley forming the A.A. and Waite taking over the Isis-Urania temple. Loyalists to Mathers were men like Edward Berridge and J.W. Innes-Brodie who were part of the reconstructed Alpha et Omega, not Crowley who seems to have jumped ship with most everyone else.

As for Crowley being a central figure in the dissolution of the Golden Dawn, I’m sure Crowley liked what this “fact” did for his rep, but ultimately there isn’t much support for this idea either. The Golden Dawn lasted for fourteen years, a very long time for a group of its type, and in that time it had grown to several hundred members with several different temples, all with their own leaders. The group had become large and bloated, the two remaining of the three founding members were at odds with each other, they had been disowned by their German superiors, and their leader had relocated to Paris while the bulk of the organization was in England and being led by others. Factions were forming against Mathers, and that the group had to change was inevitable prior to Crowley joining (which occurred very late in the Golden Dawn’s life-cycle).

Even if Crowley was responsible for the death of the Golden Dawn though, this isn’t something that should have bothered Waite one bit. He was, after all, one of the folks that wanted to change the current direction of the group. Ultimately the dissolution of the Golden Dawn ended with Waite wrestling complete control over Isis-Urania, the group’s original temple, from Brodie-Innes, which Waite held for over a decade before he ran it into the ground on his own.

So if the two didn’t have a reason to fight, what would they get out of a rivalry. To begin to answer that, one has to look at how traditionally, and to a large part even today, magickal information is gathered. When someone is reading a book concerning ceremonial magick, sometimes other books or magicians are named. For instance when Waite references Papus and the Tarot of the Bohemians in the PKT. The reader is then aware of another author or book to look for, and in this way the author recommends other books to the reader by pointing them out. It isn’t coincidence that nearly every book listed in the bibliography to Waite’s extraordinarily popular PKT are considered important and influential books on tarot, even if he did kind of pan them.

The problem is, there’s no such thing as bad press. Although a book Waite says is devoid any value obviously won’t send as many seekers as one he highly praises, he’ll still send more people towards it than if he outright refuses to mention it. So if you know what you’re doing, as Waite did, you never mention a name or book title of someone you despise. We actually see this with Paul Foster Case, a former Alpha et Omega member and anti-enochian magician that actually did dislike Crowley and his works. When Case goes off on Crowley, which he does, he never mentions him by name. If you’re familiar with Crowley already, you’ll probably get everything Case is trying to say, and maybe be deterred from him. If you’re not familiar with Crowley though, you’ll have no idea what Case is talking about, and so he isn’t leading you to him.

Waite and Crowley, however, were both very willing to specifically name the other. And their insults only go to grow each others reputations in a positive way. Every time Waite talks about Crowley he paints him as the magickal rebel, the guy who will let loose the great secrets without requiring years of dedication and the guy that will give away the powerful and, let’s face it, sexy magick that other people guard. Meanwhile Crowley paints Waite as an old school occultist that won’t give up on antiquated traditions, but this of course makes Waite out to be a wise old man with access to powerful information that he’s guarding.

Notice how both men also refrain from ever delivering a killing blow. Waite could have done tremendous damage to Crowley’s organizations had he simply shouted about the sexual practices, particularly homosexuality, present in Crowley’s system, something that would have been clearly discernible by examining just Crowley’s published works. Waite meanwhile was a notorious plagiarizer, and although Crowley may not have known about more obscure sources like the Sola-Busca tarot or the Book of Days, he definitely knew about some of the sources, like Waite lifting the design of the devil card from Levi. Had Crowley exposed Waite, he would have seriously knocked down Waite’s credibility and perceived value.

Also keep in mind both men were notorious liars. Many of the facts Crowley claims to have happened in his life are easily disproven with historical evidence. Meanwhile Waite outright lies at times, such as his belief that there was no connection between Kabbala and tarot (this when his own tarot deck has definite Kabbalistic influences). Neither man could really be trusted, and both are probably amused to no end that they managed to trick so many people for so long with a made up rivalry that did nothing but benefit both men.