What is an Altar?

An altar is a space that we dedicate to a specific entity or entities.

What is the purpose of an altar?

What can an altar be made to?

In western magick altars are most often made to specific deities. In Eastern cultures altars to dead spirits are also common, a practice which is also still practiced in Mexico on the day of the dead as a hold-over from pre-Christian Mexican beliefs. Additionally though altars can be made to just about anything. Sometimes altars are made to a general type of entity, such as fae or dragons, rather than something specific in order to summon them forth. Other times altars are made to specific angels, daemons/demons, or primal entities.

What do I need to make an altar?

To create an altar you only need two things, a space to dedicate and a representation.

Sometimes a specific piece of furniture is purchased for the altar, either a small table, a pillar, or a ledge that attaches to the wall (good for areas with limited space). However just about any flat surface will do, including counter-tops, end tables, cabinets, and the tops of bookshelves, entertainment centers, and computer desks. Generally you don’t want altars on the floor because of the tendency for them to be disturbed by people and animals tripping over them, and also for safety reasons when candles are lit on them, but this isn’t an issue with very large statuary (although these tend to be out of the price range most can afford).

As for a representation, statuary is the most common. Plaster statues are very affordable with statues selling for less than $10 a foot, although there’s a somewhat limited selection with plaster. Higher quality statues made of bronze or with a marble finish are also available, many of which are over a foot in height and can be purchased for under $100, and there is a much wider selection available, especially in regards to the Greek and Roman traditions. Wooden statues are also available and a bit cheaper and offer an even wider variety in the Nordic and Eastern pantheons. For things like fae and dragons there are a wide variety of statuesque options available. Custom statues can also be made, although this can get pricey.

Vases and urns also make good, though less common, representations. There are a wide variety of recreations available for the Greek pantheon. Urns with ashes (of the specific dead person) in them are also good for altars devoted to a dead spirit. Vases tend to be a bit more expensive though so aren’t used as much.

Sometimes a representative item may also be used on an altar. For instance Saturn is associated with the scythe, and so an altar to Saturn may include a scythe on it as Saturn’s representation.

Pictures may also be used as representation, and can provide a low cost method to making an altar when money is tight. All you need to do is find a picture of a statue or a drawing of what you want to represent, print it out, and put it in a picture frame (which can be bought for a few dollars if you look around). If you have some artistic ability, you may even draw the picture yourself, and this could have a much greater connection and significance to anything you could buy in a store.

Also, if space is getting tight, you could use wall reliefs or paintings as altars.

What is an active altar and how do I activate my altar?

How do I charge an item at an altar?

There is a general practice of charging an item on an active altar. Magical tools (such as knives and swords) and candles are the most common items. Typically the item is put upon the altar and left there for a period of time to soak up the energy. Care should be taken to make sure whatever the altar is dedicated to is okay with charging the item. The practitioner may wish to light candles, communicate, and perform rituals in order to activate the altar during the charging process.

What about putting other things on the altar?

Besides your representation and your surface you don’t need anything else for your altar. As discussed above you may wish to light candles or incense on your altar, and you may wish to charge objects on it. It’s fairly common to add specific candle holders or incense burners to an altar to be used only on that altar, although this isn’t necessary. You may also wish to add items that are either owned by or made as an offering to what the altar is dedicated to. You may also add magickal items that are associated with the altar and what it’s dedicated to. Other items may also be added to the altar to dress it up or for storage, but do see the next item.

What shouldn’t I put on my altar?

Care should be taken to make sure that anything added to an altar is approved by what the altar is dedicated to and isn’t offensive. Sometimes other deities can be added to one deity’s altar, other times this is strictly prohibited. Other times things just don’t mesh very well in ways that are hard to perceive without direct knowledge of the situation. For example, dragon imagery (unless it’s very silly or mocking) would be offensive and render a fae altar useless since dragons and fae don’t get along very well and don’t care too much for each other.

Also you need to remember that an altar is both a beacon and invitation for things to enter your house. Putting a representation on an altar, even if the altar is not dedicated to that representation, may draw it into your home. True story, a friend of mine acquired a stuffed animal of the Mothman and put it on an altar in his living room. Various negative Mothman-esque entities ended up being drawn to his home until the stuffed animal was removed from the altar.

What about dual purpose altars?

It’s typically easiest to have altars dedicated to one specific entity. Sometimes you can get away with a dual altar, the most common being an altar dedicated to two deities that are known as consorts of each other. Some deities will allow this, and even allow altars dedicated specifically to them to be used to commune with a consort. Other deities are very particular about this, and even though they may allow statuary that features another deity on their altar, won’t allow it to be used to commune with that deity.

What about a temporary altar?

Temporary makeshift altars are common and are useful when you want an altar set-up for just a specific spell or to aid in communion with a particular deity or entity, but don’t want to invest in something more permenant because of space or money concerns, or because the energy is unbecoming of the practitioner.

There are two easy ways to make such an altar. The first is using a computer monitor. Go online and find a picture to act as a representation, then download the pic and maximize it on the screen. On many desks there’s even enough space to light some candles in front of the monitor if you wish. This method is good if you just want to commune with something, although it may provide some distance and spatial issues if you need the altar for spellwork.

My Altars, for example: 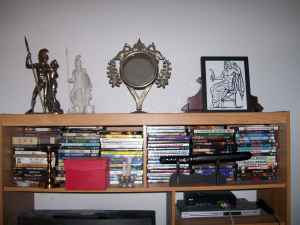 Here are my altars to Ares (left) and Saturn (right) positioned on top of my entertainment center. The mirror in the middle is a sentient magickal item that needs a good central point and isn’t associated with either altar. Note that in addition to movies I store working tools beneath the altars, including my sword, candles, candle-holders, ect. 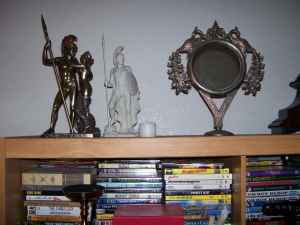 This is a close-up of the Aresian altar. I have two statues of Ares put up, one of Ares with Aphrodite which correctly associates him as a god of love, and one of Ares alone (when I have more space I’m going to split this into two altars). The candle I used as an offering to Ares is still at his altar so it isn’t used elsewhere by mistake.

Here’s a close-up of the Saturian altar. Since Saturn depictions are so very hard to find I’ve blown up a picture of Saturn to use as his representation and put it in a frame. It isn’t the best drawing, but it is a correct interpretation. Behind the picture is a clock, one of Saturn’s symbols.

Here’s my altar to Persephone, atop the bookshelf. The small statue is a reproduction of a Grecian tomb piece and probably the only good interpretation I’ve seen of Persephone for sale, although I have some issues with the company that makes it. The larger statue is the rape of Persephone, and an okay interpretation, but far from my favorite (though easily obtainable). The candlestick is a sentient piece given to me by a friend who acquired it at a thrift store. As far as we can tell, she initially came from a Persephonic altar, and she seems happy to be on one again. She also likes to have taper candles in her.

This is Fortuna’s altar on the left side of the computer desk. The candles are not Fortuna’s, they just ended up there after some recent ritual work. The luck frog and his coin have both been personally enchanted by me and Fortuna agreed to let them be put upon her altar when I needed a safe place for them. I actually had a vision of a similar looking prosperity Buddha in that spot so I went out and bought the closest thing I could find to put there. At times during spellwork Buddha gets removed to make room for candleholders or whatever else I may need up there.

Here’s my Venitian altar on the right side of the computer desk. The larger statue is a plaster statue purchased at the flea market for $15 and was my very first altar piece. I picked up the smaller marble statue when I had more money. My dragon incense burner is also there. The smoke comes out of his nostrils. It’s very cool and fae like. There are also two pieces of emerald on the altar that have been blessed by Venus.

This entry was posted on Monday, July 28th, 2008 at 12:17 pm and is filed under Deities, Entities, Magick, Magick 101. You can follow any responses to this entry through the RSS 2.0 feed. You can leave a response, or trackback from your own site.